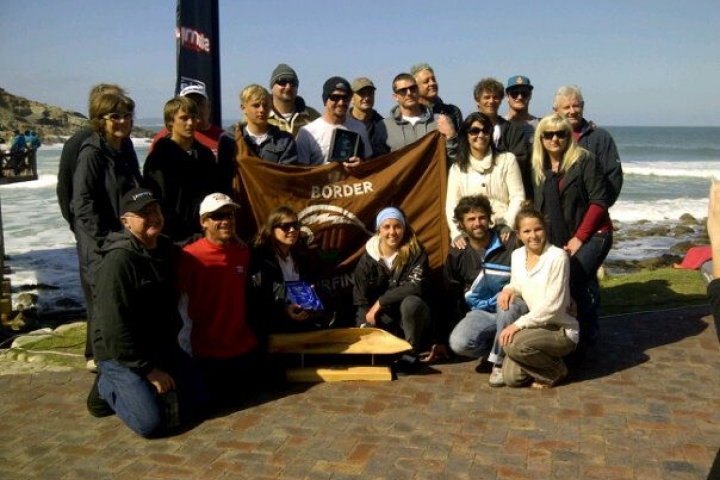 Five years after the last VicBay Quad was held at Victoria Bay and thirty six years after Southern Cape’s first chairman John Pfaff created the very first Vic Bay Quad surfers from the five Cape provinces were back in action at this fantastic point break.

The 2012 Reef Wetsuits Vic Bay Quad in memory of John Pfaff is now firmly back on the Surfing South Africa calendar and true to form Victoria Bay provided the type of surf associated with this great event. For three days powerful 6 to 8 foot surf pushed its way around the Vic bay point and only quietened down as the contest ended at 1pm on Sunday afternoon.

Traditionally the VicBay Quad involves the five Cape based provinces. Hosts Southern Cape, neighbours Boland and Western Province and Eastern Cape cousins Border and Eastern Province. Surfers competed in Men’s, Women’s Over 30, Over 40 and Over 50 Divisions and at the end of the contest all the scores were added up to determine the team champions.

There is no prize money at stake and the champions take home a medal and a trophy but the Vic Bay Quad always was a special event and this year it was no different.

Tributes were paid to founder John Pfaff by the surfers who competed for their provinces and the individuals who committed their time and support to the contest. Emotional words were spoken at a social function held at the end of Day One which set the tone for the event. On the final day, just before the Men’s final was held, John Pfaff’s son David, Sean Holmes and John’s best friends Tortie Cloete, Rob Wiese and Leonard Giles spent 20 minutes surfing a few waves in memory of him. Another of John’s friends, Stephen Hair, created a team magnificent trophy made out of olive wood and each of the provinces had a trophy created in their name which were presented to the individual champions.

Current SA Champion Nikita Robb of Border dominated the Women’s heats and the final. Tarryn Chudleigh of Western Province was second, Emma Smith of Eastern Province came third and Tasha Mentasti of Boland was fourth. Called up at the last minute to surf for Western Province seemed to energise Steven Gadd who managed to edge out Shane Pratt of Boland to win the Over 30 title. This was Gadd’s first national title and he won it by .30 points from Pratt. Eastern Province surfers Shane Pittard and Michael Hill were third and fourth respectively.

One of the best performances throughout the event came from Wayne Monk of Border. His early round scores were all impressive and he put the seal on his event by winning the Over 40 title from Andrew Preen of Western Province. Monk’s Border teammates Andre Malherbe and Gareth Sepp were third and fourth respectively.

Apart from Sean Holmes victory in the Men’s final the best performance of the contest came from Stephen Hair in the Over 50 final. Hair, a lifelong friend of John Pfaff’s and the creator of the team trophy posted the highest wave score of the contest in the “Veterans” final, a huge 9.5 out of a possible 10. His heat score of 16.40 was the highest of the contest until Holmes posted a 17 in the Men’s final. Vic Bay legend Leonard Giles came second here with Andre Venter of Eastern Province taking third ahead of Border’s Dave Fish.

When all the points were tallied Border’s depth across the divisions gave them a small edge of Southern Cape and the defending champions will take the trophy back to East London. Boland were third, Eastern Province came fourth and Western Province were fifth.

About the Reef Wetsuits VicBay Quad The VicBay Quad was the brainchild of John Pfaff, Chairman of the newly formed South Western Districts Surfing Association. It was held in May 1976 and involved teams from WP, EP and SWD. (It was actually known as the VicBay Triangular for the first three or four years.) Although it was scheduled for VicBay that year it took place at Wilderness because the surf was too small at Vic.

Over the years Border, Boland and the SA Defence Force competed in this fantastic contest which will always be John’s legacy. John Pfaff and his family have been part of southern Cape surfing for over four decades. This contest, which was not merely a competitive event but also a social get together, is part of John’s surfing legacy and it is only fitting that 2012 will see its revival.

Using a similar format and formula comprising fun, competitiveness and camaraderie 2012 will see many of the surfers who were at that very first event making the journey to Vic Bay to celebrate the event and remember John Pfaff.

Teams
The five teams from WP, EP, Boland, Border and Southern Cape, are made up of young and old and surfers can only compete in one division. In line with tradition the first rounds will get under way at midday on Friday August 17th

Social Activities
On Friday evening team members, friends and family will get together for the traditional social function. This will take the form of a “bring n braai” and will take place in the area across from VicBay Beach immediately after the last heat of the day. Musical entertainment in the form of professionals and perhaps a provincial “muso” or two will add a special flavour to the evening. Special effects SSA will be creating trophies from each province to present to the winners of each division. These will be presented by each attending province. The Pfaff family will be providing a trophy which will be awarded to the winning team.